Mazlatan was the 2nd stop on a surf cruise I recently took.  Before I went on the cruise trip there, I had researched surf spots to try in Mazlatan, as I wasn’t familiar with any surf breaks in this region.  I did a search in da Surf Engine app for great waves in Mazlatan for all skill levels, at a beach break with sand, that had fun waves (not to powerful, but packed a punch for some speed!) which were pretty consistent year round.

Playa Bruja was one of the first spots I saw and when I went on its surf spot page in da Surf Engine app, I clicked and looked at some pictures and videos and it definitely looked like the best surf beach in this region for me!  I also clicked on the articles button within the surf spot page of the app, and by doing a bit more reading came across Jah Surf School.

When I went to the Jah Surf School website, I read that not only is it a surf school, but its owner, Elias, who goes by “Pony” as well, also gives special guided tours. I read great reviews on Elias and his surf school online (which I’ve also noted on the Playa Brujas surf spot page comment section in da Surf Engine app), so I reached out to him to arrange transportation and board rental to Playa Brujas.

He did offer to take me on a tour to some secret spots north of the area but since I was with my Mom, I figured I’d stick with Playa Brujas for the short time we would be there (and spare her the back pain she’d endure from venturing out on the bumpier roads).  I definitely want to come back though and explore those secret surf spots!

When we got to Playa Brujas, Elias set up a tent, table and chairs for my mom and I to relax and brought the funboard out for me to surf.  It was like we had the beach to ourselves that day (as it is off season there in October), although there were a few people out in the ocean!

When I went out to surf Playa Brujas I realized that it is also a great surf spot for boogie boarders (and I’ve updated that information on the surf spot page in da Surf Engine app as well) as there were quite a few boogie boarders out there doing pretty cool tricks and body spins, etc.  I was surfing a fun board, which I think is the best board for me at this break, however there were some other short boards and a longboard surfing in the area as well.

This beach break is really fun and has some definite punch and power but it’s still a forgiving wave, especially on the smaller day I was surfing (but not too forgiving as the power of its waves on a smaller day ripped the suction cup mount off my rental board with my 360 fly that was getting 360 video of the surfing that day, but that was my fault and I can write a whole blog about not ever using suction cup mounts again or my invention to create a hand leash for them, ha!).

The waves were definitely fast enough to register and count on my RipCurl Search GPS watch, although only 1 wave registered as the waves are pretty quick and short there as well, especially at high tide when I was surfing.  The next day it was supposed to get really big there, like around 7 feet, so I was glad that I ended up surfing there on the day I did (as the Carnival Cruise line itinerary changed a few days before we left and I had to change the day of pick up with Elias which he was definitely accommodating and worked into his schedule).

After surfing (and while trying to find my lost 360fly), I walked up and down on the beach.  I took this first pic of the infamous Playa Bruja sign etched into the rock formation at the north side of the spot. 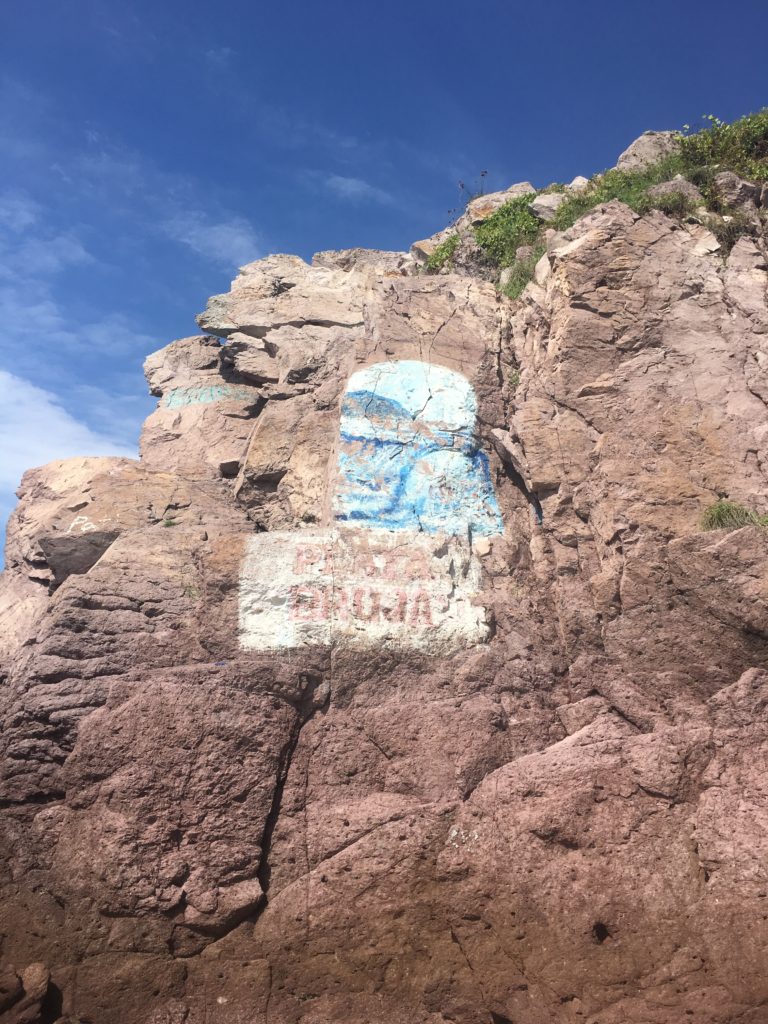 There’s also a restaurant and some shops just as you enter the beach from the north side that I’ve read great things about but I was focused on getting as much surf time in as I could when I was there with my limited time so didn’t get a chance to check it out.

Down further south on Playa Brujas beach I ran into the Riu Resort which is an all inclusive hotel with a great pool and chairs right on the beach!  It actually is a pretty affordable hotel with rooms for about $75-85 a night (being all inclusive!!) during their off season. 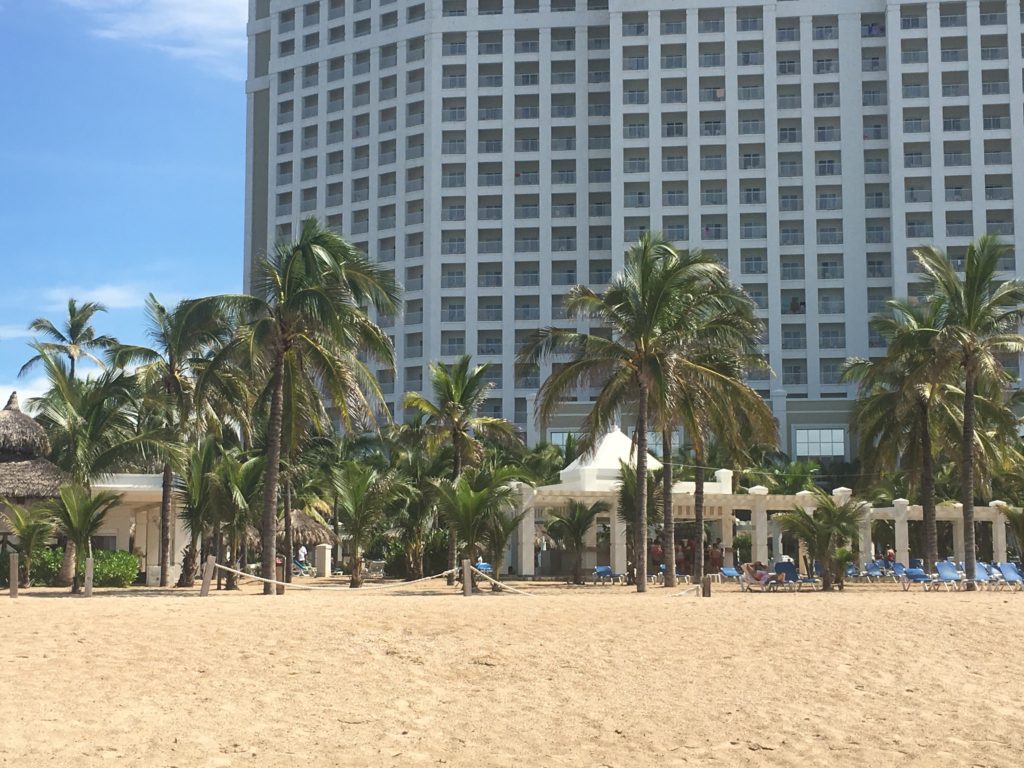 I think I’ll definitely be back with my family to stay in Mazlatan at this place (and to check out those secret surf spots Elias takes surfing visitors to).  Mazlatan is a great authentic Mexican city that hasn’t gotten so Americanized yet like Puerto Vallarta & Cabo, at least outside of the “Golden Zone”.

As we were driving back to the cruise ship, I told our surf guide Elias, that the only thing that would make this day even better and totally complete is if I got to drink out of a Mexican Coconut.  He immediately did a quick u-turn on this road we were on which lead us right to a lemonade stand type of Coconut Roadside Hut!  It was so cool to engage in this truly authentic Mexican experience.  One of the guys that worked there literally was coming from picking coconuts off of the tree and hauling them into the venue in a wheelbarrow!!! 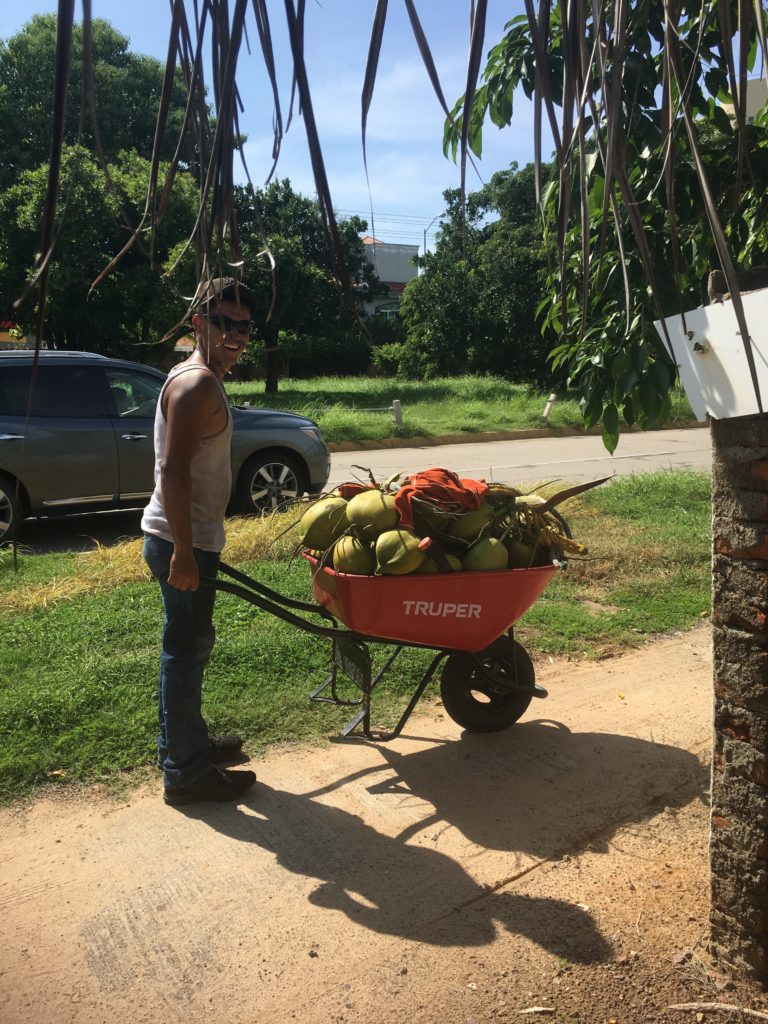 The other guy working inside the hut took a machete knife to hack open the coconut and I got some great coconut hydration!!  When I was done they also cracked the coconut wide open so I could eat the coconut meat!

If you plan surfing in Mazlatan, I highly recommend booking Elias at Jah Surf School for a surf guide tour or even just for a rental and beach furniture set up on any city beach, as he is very in tune with all the local spots and secret spots up north!  He is also super helpful and punctual and got us back to our cruise ship in plenty of time!!

Here at da Surf Engine, our goal is to fuel your stoke by helping you find your perfect waves all around the world.  Nothing beats…

Blog update – the easier places to get barreled now are often amongs all of the new wave pools cropping up. But if you want…