The last stop on a surf cruise I recently took was at Cabo.  I didn’t have much time to spend in Cabo as the cruise ship was leaving at 3pm, but I had done my research in da Surf Engine app before hand so I knew exactly where I wanted to surf when I was in Cabo – Old Man’s, also known as Playa Acapulquito.

This surf spot is located smack dab in front of the Cabo Surf Hotel and is great right point break with long waves for longboarders (and all board types), with an easy paddle out (once you get past the shore pound at high tide).  The water is also clean and clear crystal blue and warm which are definite ingredients in perfect waves for me (although I wouldn’t surf there after a rain due to the man made tunnel that rainwater flows through). 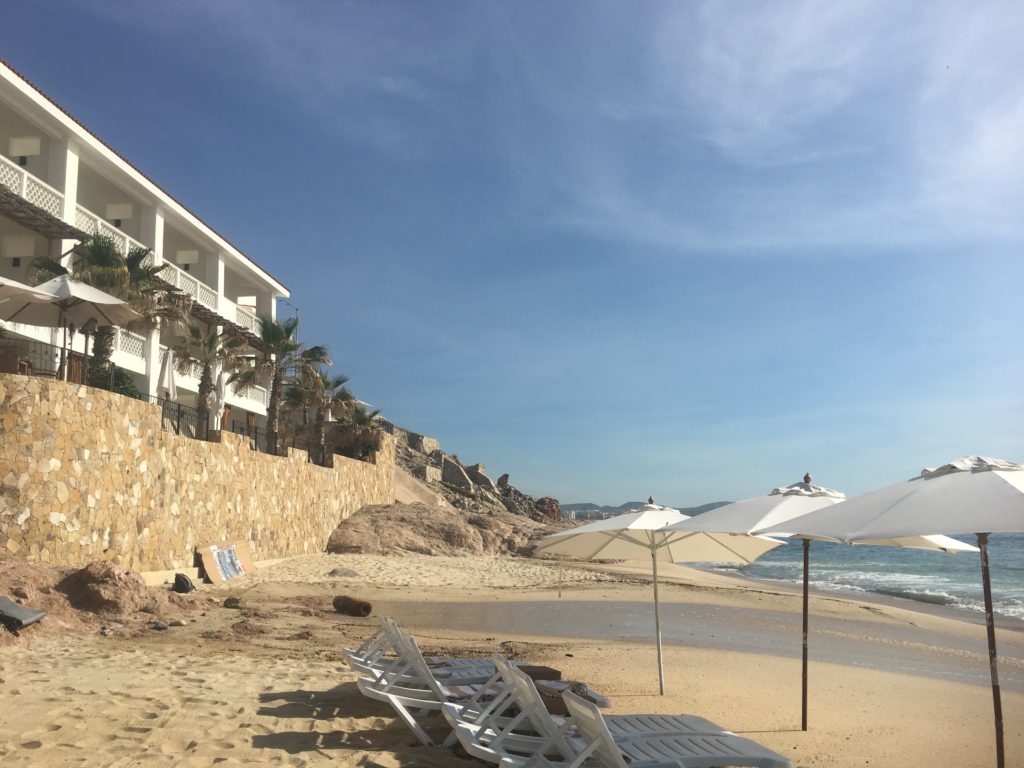 If you’re staying in the area and have your own board you can park for free up on a small lot off the highway and walk through this tunnel area to get to the beach.

However I knew the Cabo Surf Hotel also has a surf school, Mike Doyle’s surf school, which has a large selection of rental boards, which was perfect for me, coming from a bus ride from the cruise ship. Traveling with a longboard is a definite hassle so I definitely prefer to rent those boards while I’m visiting places and it’s also fun to try out and experience new surfboards! 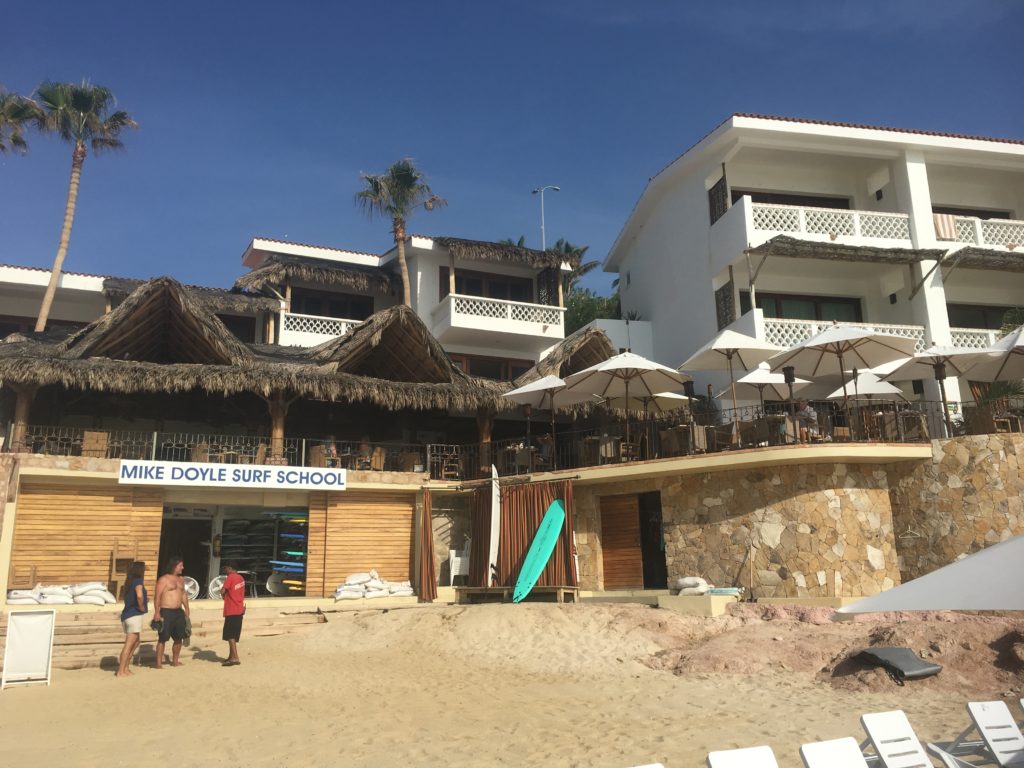 When I got to the hotel, I paid for my rental at the lobby desk and then went outside on the beach to pick up my surfboard for the 2 hour rental.  Typically they will rent chairs and umbrellas (to shield you from the hot Mexican sun) to non guests for around $15-20 (guests can only get the lounge chairs). However, since I was just there for a short 2 hour time period visiting from a cruise ship, they were gracious enough to set up a chair and umbrella for me free of charge.  Thank you Cabo Surf Hotel! 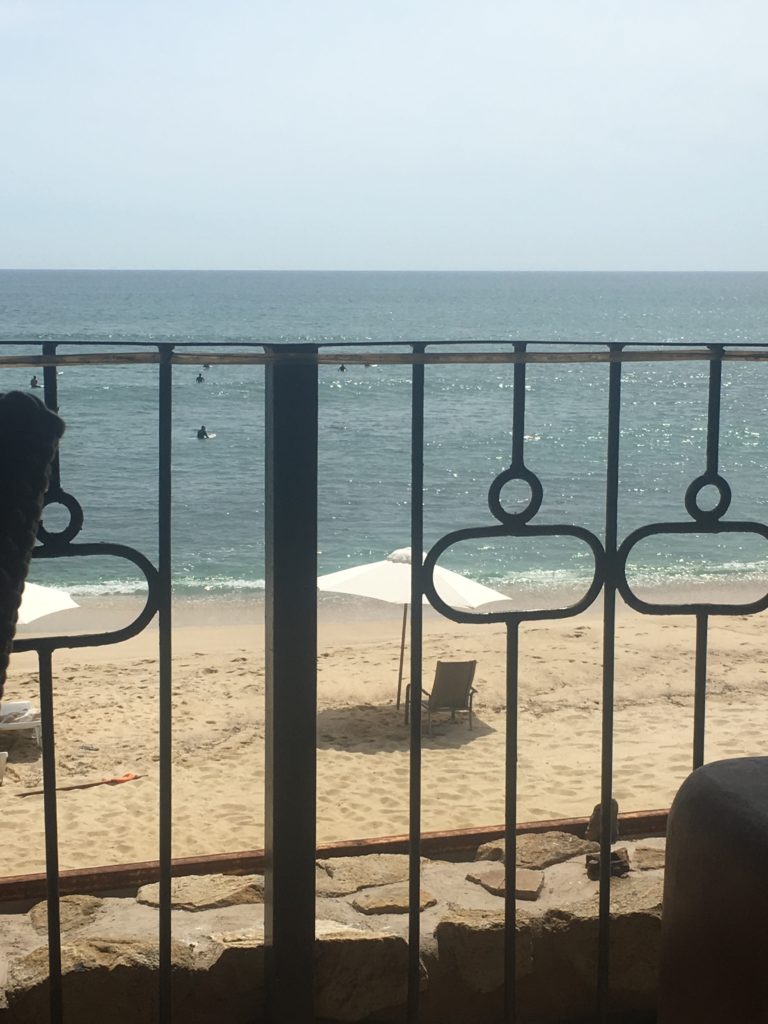 I was sitting on my chair for a few minutes just observing the spot and seeing how the waves were coming in.  One thing I never realized from all the YouTube videos I watched of this surf spot is that at high tide, there is a definite strong undertow from the water coming down from the steep sand incline at the start of the water.

The sand and its incline and undertow kind of reminded me of the beaches on Hawaii’s Oahu North Shore area.  At low tide I’m imagining that it’s a completely different look because right after all that sand the surf spot is pretty rocky underneath with lots of urchins as well.

I brought my booties as I didn’t want to chance stepping on an urchin and needing medical help.  The hotel actually has a sign on the beach that warns beach goers of the urchins and actually lists a doctor’s name and info in case you do happen to step on one of them.  At high tide though, urchins really weren’t a problem, as I started paddling on my board before I even got out of the sand. 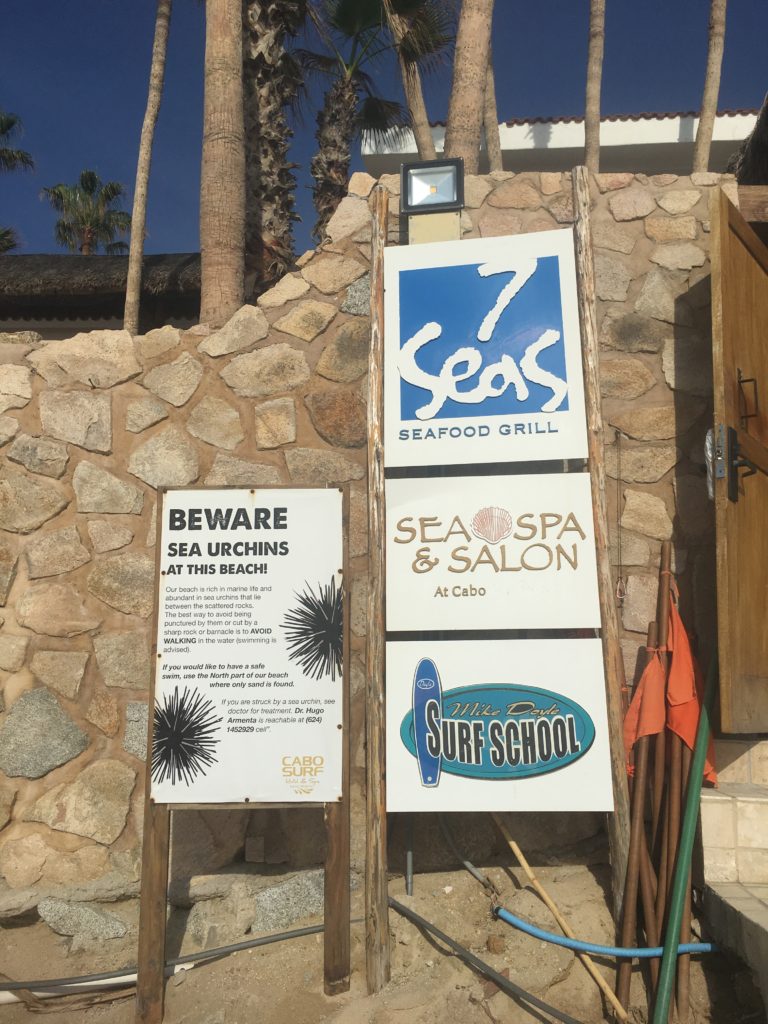 I paddled out and sat in the lineup for what it seemed like 30 minutes without one wave coming by.  I was wondering at that time if I’d catch any waves at all.  Even the guy at the lobby told me I might want to check out the waves for a bit before renting a board, as it had been flat but some waves were starting to roll in.  With my bus adventure behind me, I didn’t even care though if I caught any waves, just paddling out in the blue clear warm water at that surf spot to get a feel for it would have been good enough for me.

However, shortly thereafter the waves started to roll in and a caught a few super fun, fast, long ones.  My RipCurl Search GPS watch only clocked 2 of them though and said my longest wave was 155 yards, that’s longer than a football field!  One of my waves I’m saying was a party wave, but I may have just not seen another surfer starting off on the wave closer to the big protruding rock (which I was avoiding like the plague as that is one fear I have, of rocks!!). He almost ran into my board but I managed to angle over and get out of the way just in time.

When I paddled back out I saw the board that I almost ran into and apologized to the guy.  I mean I was sorry but not really that sorry as I only had two hours at that spot so I was being aggressive when I saw this great wave coming from behind me.  Regardless, I probably could have caught more waves if I positioned myself a bit more west towards the rock, but I still was able to catch some fun ones from my position.

At just about the 2 hour mark I headed back in and managed to get back to shore after dealing with the tricky under tow current coming back at me from the steep sand on the beach.  I definitely recommend mid tide for this surf spot (as da Surf Engine’s surf spot pages lists as best tide), as high tide tends to have more shore pound/under tow and it’s a bit rockier at low tide.  I think it’s probably best to stay at this hotel so you can spend a few full days at this beach and experience it in all conditions!

After I surfed I relaxed in the Cabo Surf Hotel’s 7 Seas Seafood Grille restaurant and had some blue shrimp tacos (2 in corn and 1 in lettuce to be healthier), chips and guac sauce, and a margarita!  If I’m not surfing I like to watch others surf and you definitely get some great views of surfers at this beach from their restaurant. 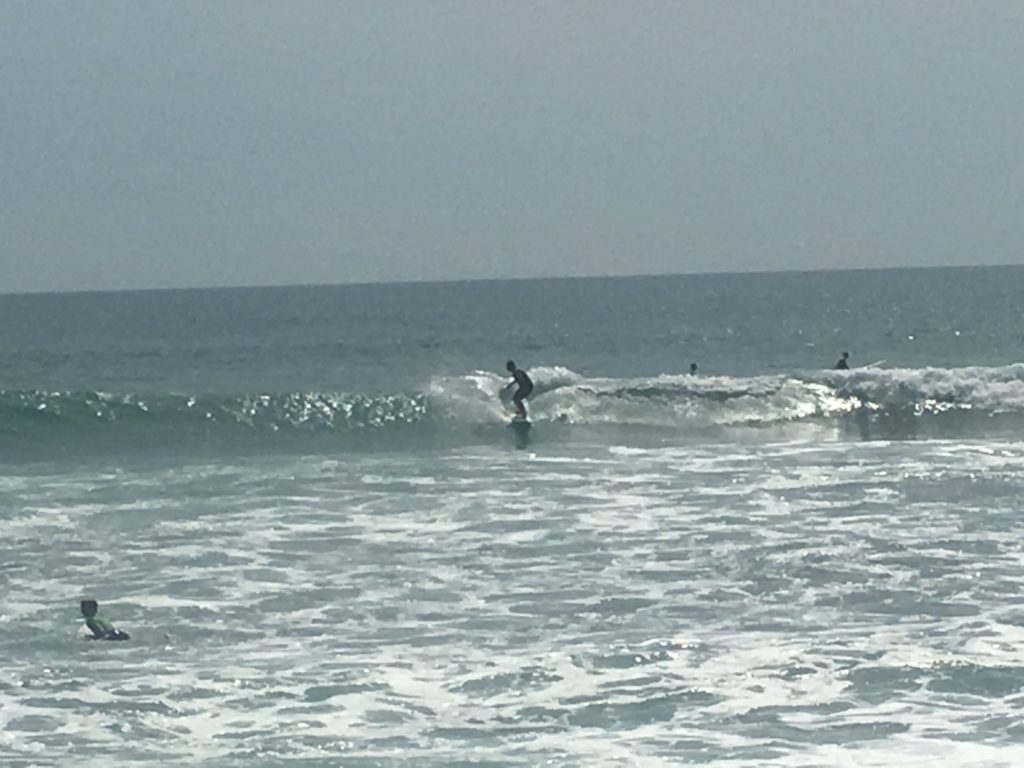 One of the locals was actually checking out the waves from this place as well! 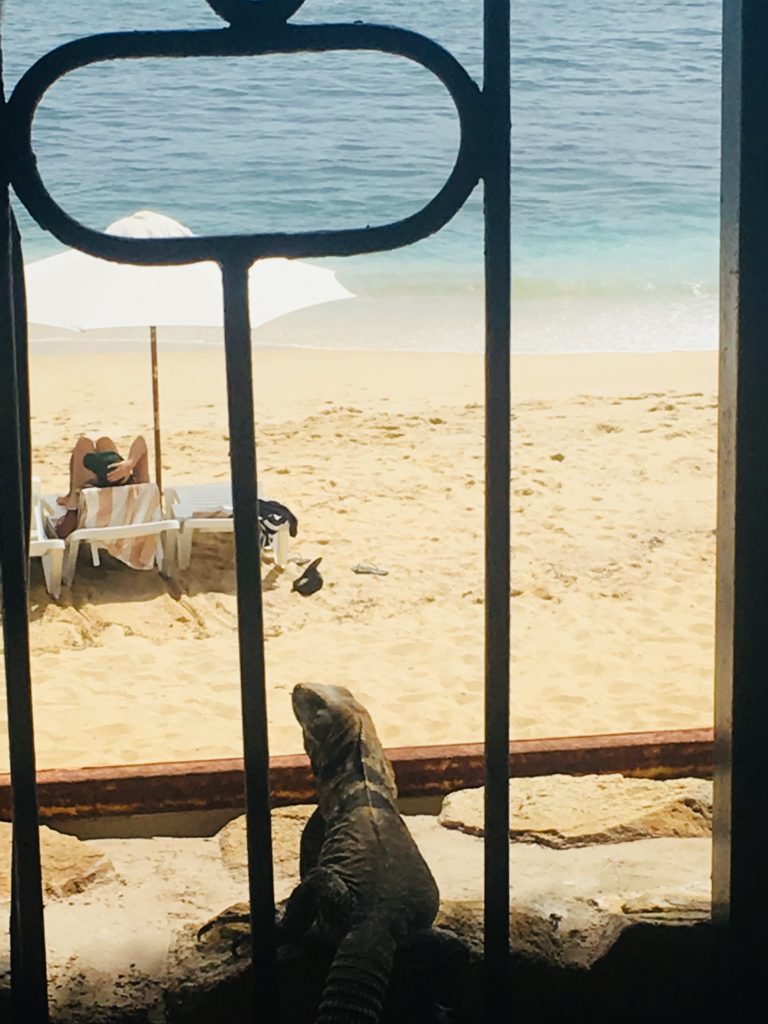 After lunch I decided to save some time and take a cab back to the cruise ship and was able to actually have time and enjoy the scenic ride back to the ship!

This is a place I definitely will come back and stay at and visit for a long weekend or so.  The surf is best at this surf break in the summer, but it’s also the hottest and busiest at that time too, so perhaps I’ll find some good deals in the other time periods of the year as this surf spot still is pretty consistent all year.

The hotel is a bit pricier and is probably best suited to people that really want to come there to enjoy the surf as there’s not a lot right nearby to do without taking a cab.  However if you can find some surf buddies in da Surf Engine app with this surf spot on their sand bucket list, getting an ocean view room with a few people makes it much more affordable!!!

Here’s the video of my trip as well!

Who wants to come with me next time I go?  I’m thinking of going here for a few days and then up to Scorpion Bay for the super long rides they have there sometime soon.  Perhaps I’ll plan a trip there soon someday!

Playa Brujas Surf Break in Mazlatan – Surf Spot Story & Profile Mazlatan was the 2nd stop on a surf cruise I recently took.  Before…

The Cabo Surf Hotel is the ultimate paradise for long boarding surfing. I briefly visited the surf break that is within footsteps of the hotel,…

As I’ve been planning my “surf trip” to Texas, yes a trip to Texas specifically for surfing (and ya know visiting my fam that live…

Surfing Boat Trip Cruise Adventure to Mexico When a surfer reads the headline of this blog, they might automatically think of the kind of surfing…