I recently visited Puerto Vallarta while at port on a surf cruise trip and ventured out to Punta Mita to surf its remote & most consistent surf break named La Lancha. In Spanish, La Lancha means small speed boat. The name of this surf spot is super relevant, as I got off a big cruise ship to hop on a “lancha”, a small speed boat to get to this remote surf break.

The surf spot is also accessible by land, however due to prior issues with the owner of the nearby land and property, the tour company that took me there, Vallarta Adventures, decided it would be easier & quicker to run their tours their by boat.

The boat ride to the surf spot was super fun and I got a great view of Puerta Vallarta as well as Nuevo Vallarta and the beaches on our way to La Lancha. It was almost a private tour as some other people who had also booked the tour didn’t show up, so it was just me, another girl, two surf guides/instructors, a photographer, and our boat driver!

When we arrived at the surf spot, our guides got the surfboards out and showed us how to do the “starfish” jump off the boat as the water was shallow and jumping straight off the boat could potentially injur you. I think I did more of a back flop, but it wasn’t bad because the water was super warm and I was just excited to get in the water and try out this new surf spot.

The waves were pretty small when I was there and it was high tide (the spot is at its best at low tide, as you can see from it’s surf spot page on da Surf Engine app), however the waves still had enough power and length in them to make for quite a few fun long waves ridden in the short hour surfing there. I was getting used to the new longboard I was riding at first, which was a bit longer than my usual 8’6″ longboard I ride, but once I got familiar with the board I was catching some pretty long and decent rides. 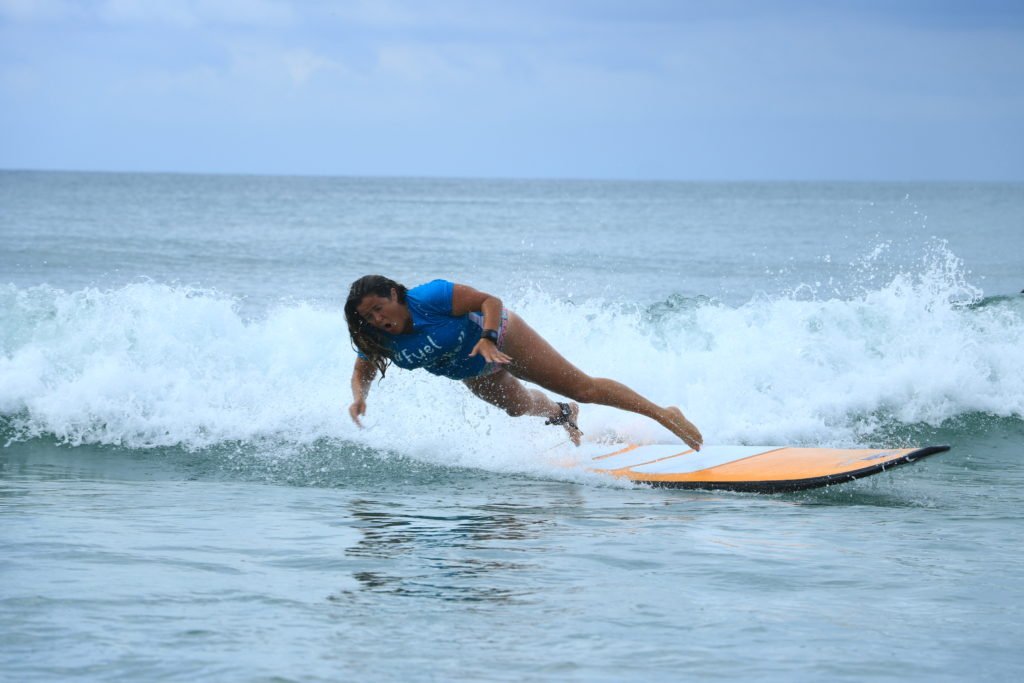 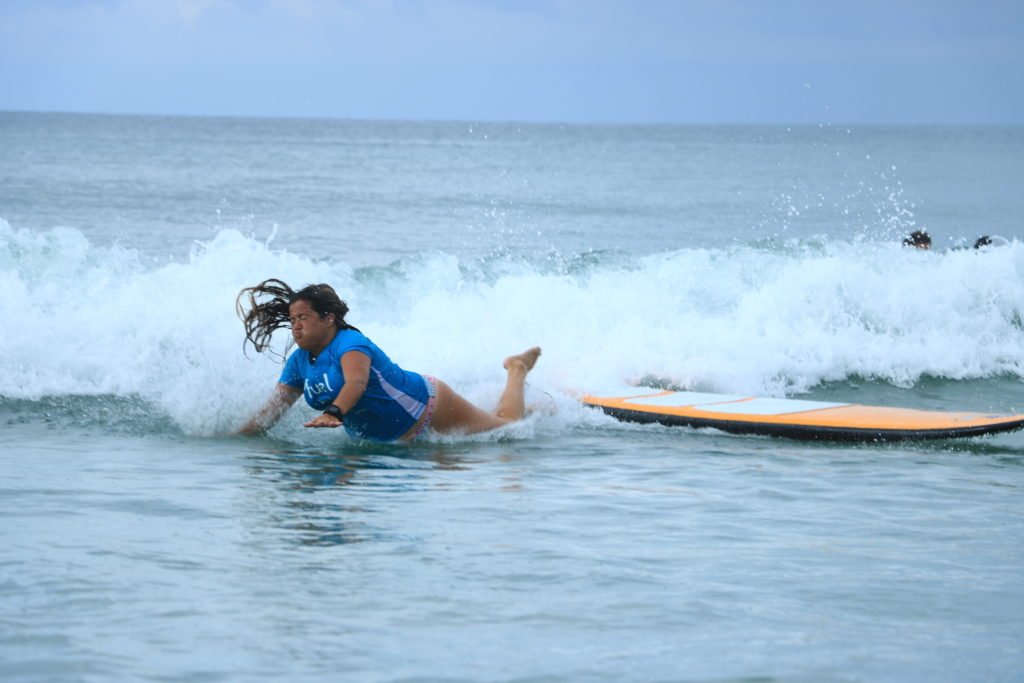 I didn’t get enough speed that day for any of my smaller waves to register on my RipCurl Search GPS watch, but the waves were still fun, super smooth long wave cruisin, pristine, and open faced green, and that is the kind of surf style that is most exciting to me if it’s not fast! 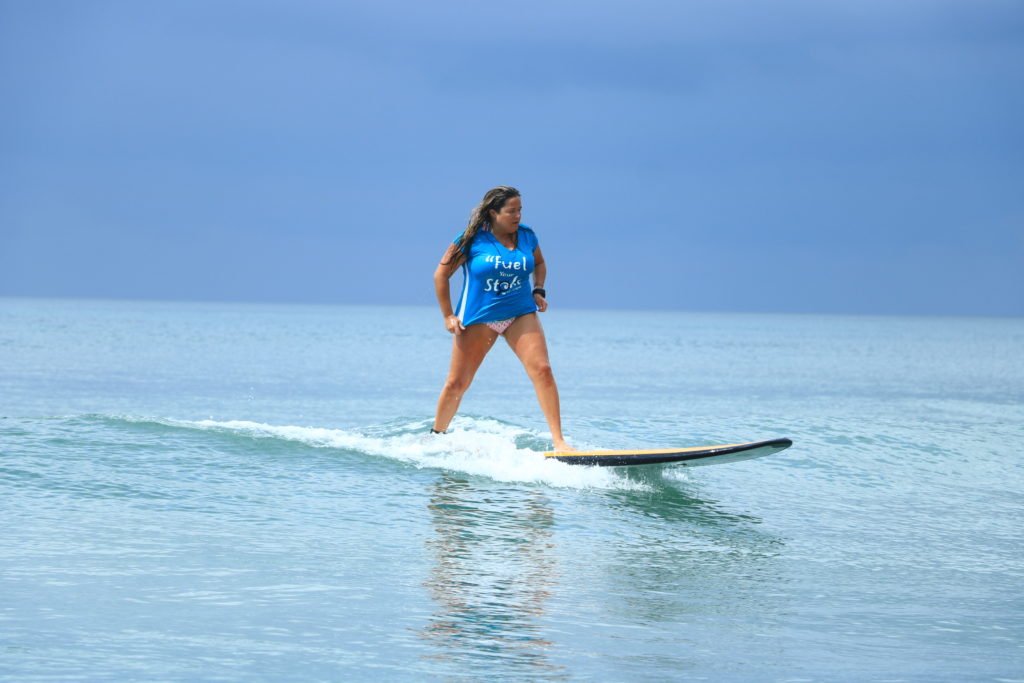 You can surf various types of boards at La Lancha, including short boards, but the day I was there was definitely a longboarding day. It was definitely a hotter day in October and I was actually super glad it was cloudy for a change (usually in San Diego I’m a completely sunny afernoon surfer). However surfing in the early morning on a cloudy day would actually be great there as the water is so warm and the air is hot.

I was literally splashing my face with the water I was so hot when I was waiting for the waves, that’s an experience I’ve never had before and I’ve even surfed in hotter places further south in Nicaragua! Needless to say I couldn’t drink enough of the water that Vallarta Adventures had for us after the surf, they supplied us with a great snack afterwards on the boat as well as a lunch at a cool place frequented by “locals” (aka friendly and intriguing iguanas) nearby their headquarters.

On our way back from the surf outing, it was weird how there was brown water right next to the bright blue water which was because the brown water was from the river that was flowing into the ocean!

I still am dreaming/thinking about this place and can’t wait to come back and surf it again and stay in Punta Mita for a longer time. I initially thought Punta Mita was just full of big, fancy expensive resorts such as the Four Seasons and Regis, but on the bay side of Punta Mita, where most of the surf action is at.

The Anclonte surf spot area (which is another super chill surf spot I want to try when I go back) has a lot of affordable condo rentals right on the beach if you can get a group together, otherwise there are some nice options within a few hundred feet of the beach with beach views as well! The area is referenced as the Mexican Malibu due to the easy nature and longboarding style of the waves in that area. The Anclonte area also has quite a few local restaurants and surf shops (for surf rentals) as well.

I highly recommend using Vallarta Adventures if you are staying in the Puerto Vallarta area and want to venture out surfing in Punta Mita as taking a cab ride back and forth to Punta Mita to get to surf La Lancha would have cost just as much as my entire excursion with them (via booking through Carnival Cruise Lines).

If you’re staying in Punta Mita, I would recommend talking with Johnny at Tropical Accion to take you out to the remote surf spot of La Lancha. He was super helpful to me when I called and talked with him about options when Carnival had initially canceled the excursion with Vallarta Adventures (which long story short, it still ended up happening for me).

Here are some other helpful links to articles about surfing in the area if you want to explore more:
http://www.ocregister.com/2011/06/27/punta-de-mita-is-mexicos-malibu/
http://laquintadelsol.com/surf-breaks-punta-mita/
http://puntamitamexicovacationrentals.com/activities/surfing-stand-up-paddle/

Playa Brujas Surf Break in Mazlatan – Surf Spot Story & Profile Mazlatan was the 2nd stop on a surf cruise I recently took.  Before…

I first visited Punta de Mita on a cruise ship shore excursion that took me to La Lancha beach. I knew after that excursion that…

As I’ve been planning my “surf trip” to Texas, yes a trip to Texas specifically for surfing (and ya know visiting my fam that live…